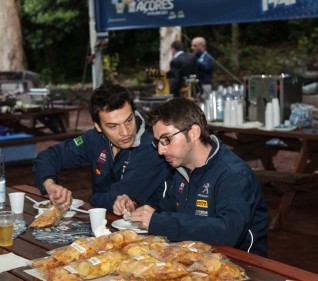 Bruno Magalhaes from Portugal is a two-time winner of the SATA Rallye Acores, in 2008 and 2010. This year he’s back with a Peugeot 208 T16 in the top R5 class – and he’s hoping to have the chance to make it three wins on Azorean soil. We caught up with him as he sampled some Azorean delicacies at the welcome barbecue last night.

You’ve been away from rallying for a little while – your last rally was six months ago in Corsica?

“Yes, that’s exactly right. I’ve not been doing much since then: just trying to get sponsors to be here. It’s one of my favourite rallies as I won in the Azores two times. The best victory of my career came here in 2010, when I won against people like Kris Meeke and Juho Hanninen – the very top people, with top teams. So I love this rally but since 2010 when I’ve been here I’ve not had the car to win. This year I have a big motivation because I know I have the car to do a good job. Last year, when I started the rally, I knew that there was no chance.”

So is there a chance for you to win this year?

“I think there is a chance to fight for the victory. Whether or not that means winning the rally in the end I don’t know, but at least there is a good chance. I know that so it’s a big motivation for me to push.”

What is your programme for this year after this rally?

“First of all we start with this rally, which is one of the high points of the season for me. Then we move onto asphalt, with the Ypres Rally, then Cyprus then Greece. I hope to do some more rallies but it depends on the budget. Realistically, it’s going to be tricky, but you never know – another sponsor might come along. Anyway, this was the rally I really wanted to do.”

Do you prefer asphalt or gravel?

“Actually I like both; part of the fun of rallying for me is to have the variety of different surfaces. I want to show that I can be strong on both.”

Does it feel special now that it is 50 years of SATA Rallye Acores this year?

“Of course, because this is a really big event, for me personally as well. I came here for the first time when I was 14. My father was a driver and I always came with him. I even used to go in the back seat of the car for the recce…it’s a real family story. I think I’ve probably been here 15 times, perhaps more. I love it.”

How was the recce so far?

“It was OK, no problem. I think this year the surface is even better than previous years, less damp and with more grip. I think they have changed the way to improve the road. In the past, I think they put more little stones on the road and this made the surface a bit too slippery. Now the surface is more compact, so the organisers have done a really good job.”

There’s a new section of the Sete Cidades stage this year, which has not been used for a very long time. What do you think of it?

“I think it’s good, fun to drive. But the downhill parts are not easy: the braking in particular is very tricky and you also have lots of fast corners that suddenly lead into slow corners, which is difficult to judge. But that is part of the challenge.”

Apart from yourself, who do you think the candidates for victory are this year in the Azores?

“For me, it’s Craig Breen and Kajto Kajetanowicz. Afterwards you have Robert Consani and Ricardo Moura. Ricardo knows these roads like the back of his hand because he’s from here and he drives on the Azorean championship, which uses the same stages. Most of the drivers come here just once a year and make two passages over the recce, but Ricardo knows the roads well and he is very talented.”

03When you are not driving, what are you doing?

“I have to earn money so that I can go rallying! I am working in real estate and also my father has a garage. So my life is basically cars and houses – and rallies, of course!”