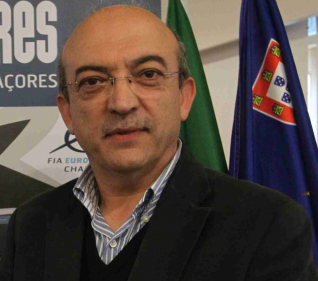 This is the 51st edition of the now-called AZORES AIRLINES RALLYE, a designation linked to the new image of the Azorean airline clearly displayed in the event’s name. This is a rally which is ranked in the ERC – European Rally Championship, right after the WRC – World Rally Championship.

As the major event of promotion of the Azores, this rally projects these islands far beyond the sports angle. It also highlights our Region through the vast media coverage provided by the Eurosport TV channel.

My first words go to the fantastic team that I have the privilege of leading, which is constituted by the heads of several departments and by many hundreds of people who, for many months now, have worked hard for the collective success of our enterprise.

Azoreans can be proud of this fact and we know that they are on our side, through the support and care they show us.

Our tribute and acknowledgement also goes to all those who, throughout the generations, have been part of this Organization and have helped overcome all obstacles while maintaining the enthusiasm alive, allowing us to reach the status we have today.

The support of the Government of the Azores has also been fundamental and recognizes the promotional nature of this event.

The support of the local authorities, of the sponsors, of the partners and also of the anonymous people who facilitate the usage of their properties for the rally has also been of the outmost importance.

The City Show and the Super Special Stage Grupo Marques, which is considered one of the best in the world, will shine again through the images broadcasted by RTP-A.

We give a warm welcome to the Teams and Pilots, hoping they will appreciate the natural beauty of our tracks. We wish for the competition to last until the last minute.

We are deeply thankful to our Farmers who make the additional effort of moving their cattle to remote areas, far from the tracks, thus allowing for a smoother development of the rally.

We count on the Spectators to be on the road applauding their favourites. As one of the major players in this event, we count on you to always follow the instructions and indications of the Authorities and Marshalls, who are there to keep you safe at all times. As usual, show the world how it feels like to be close to emotion but far away from danger.
VERY IMPORTANT: Arrive early to the locations designated as show areas, in order to get the best places. NEVER STAY AT ROAD LEVEL!

You may continue to unfurl the Azorean flag for the world to see.

CLOSE TO EMOTION – FAR FROM DANGER! WATCH THE RALLY IN SAFETY – THIS IS AZOREAN HERITAGE, SUPPORT IT!