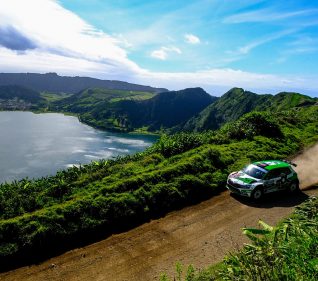 The second and final day of the Azores Rallye was the scene of a fight at world championship level, with Andreas Mikkelsen and Dani Sordo discussing victory almost to the final special stage.

On Saturday morning, the two drivers started the section separated by 1.6s and finished the same with a 0.5s gap to the Spaniard, who had meanwhile lost the lead momentarily to the Norwegian.

In the final sections and with no new tyres, Dani Sordo lost 10.9s to Mikkelsen in the first two stages of the final section, he gave everything in the last passage by Sete Cidades, but the Spaniard again lost another 0.5s and left the victory handed to Andreas Mikkelsen who won the Azores Rallye for the second time.

Ricardo Moura, who had been the first leader of the rally, started the second day 4.5s behind Sordo and 0.5s behind Mikkelsen, but began to lose ground to the two WRC drivers because he was not as confident as on the first day and lack of competitive pace from other seasons.

In the final stage and when it was enough to control Efrén Llarena who was coming in his pursuit, Moura gave a touch inside a corner and rolled slowly, getting one of the tires off the rim, losing the podium place by only 3.2s.

Erik Cais landed badly after a jump on the descent of Torrão Branco, in Sete Cidades stage, damaging the radiator and was out of the rally for the consecutive second time in the season and lose the good fifth position he occupied.

Miko Marczyk finished in a good fifth place, in a rally that was very challenging for the Pole who eventually lost second place in the championship to Efrén Llarena, both separated by seven points, but still away from leader Mikkelsen’s 136 points.

Tied for fourth in the championship, Alexey Lukyanuk and Norbert Herczig dropped out after the first stage of the day, with the Russian puntching twice in Coro da Mata and the Hungarian breaking skoda’s rear suspension at a time when he was already in super rally.

After winning a rally on previous week in an Italian championship event, Umberto Scandola did not do as well on the first day as he did in the second. The Hyundai Italia driver was the fifth fastest of the day, finishing sixth and as the best result of the season.

Second on the road, Luís Rego had a carefree day and without the pressure of the local championship, having fun in the rally and managed the seventh position more than 5 minutes from the winner, but also with a good advantage for the Mexican Benito Guerra, regular participant in the WRC events, before the pandemic.

After the premature retirement of Rodrigues brothers in the first stage of the rally, Rafael Botelho, the new leader of the local championship, took the opportunity to do more kilometers with Skoda, getting a brilliant place in the top ten.

Javier Pardo once again dominated the ERC2 behind the wheel of Suzuki Swift R4lly S and became the new championship leader with a point ahead of Russian Dmitry Feofanov who was long behind on day one.

Luis Vilariño find the stages very difficult, but at the same time marveled with the beauty of the island. The Spanish driver scored points again for the second time this season, the same not happening to Aloísio Monteiro who was even having a good performance, but ended up giving a few touches and left the road almost in the middle of the day.

After an accident in Free Practice, Victor Cartier took second place in the ERC2, being the Frenchman’s best result of the season, rising to fourth position in the championship.

Bruno Amaral achieved a result of personal dream, finishing in thirteenth position and as fourth best Azorean behind the wheel of his Ford Fiesta R5.

Jean-Baptiste Franceschi was the only ERC3 tough guy after Josep Bassas failed to return in a super rally. In addition to leading the ERC3 Junior that did not count for the event, the Frenchman also is the new ERC3 leader with eight points ahead of the Spaniard from Racing Factory.

After many problems the day before, Joan Vinyes was the best of the day in the ERC2 competition, managing to recover to fifteenth position and get a point in the main championship.

Adrian Chwietczuk had a very bumpy rally, but the Polish managed to take his Skoda from the team of a former European champion to the end in super rally.

Igor Widłak also rolled the day before, but he also managed to take the only Rally3 car present at the rally to the end.

Had it not been for a simple malfunction in the windshield wiper brushes early in the first day, Rachele Somaschini could have had a major result in this tough rally. The Italian returned on the second day and was the twelfth fastest today, beating several drivers with some knowledge of the rally.

There were few at the start compared to other editions, but the quality was great and there was no lack of competition and a lot of spectacle during the three days of rally, counting the with qualifying stage. As usual in the Azores, there was rain, fog, cloudiness and sun during the event that makes it so characteristic in the European championship.