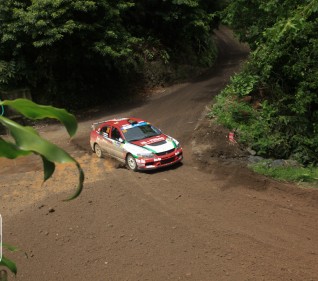 At the end of the second day, the Azorean competitors’ event scoreboard presents Ricardo Moura and António Costa (Ford Fiesta R5) as its natural leaders, since the team is involved in other classification struggles.

Luís Miguel Rego and Carlos Magalhães (Ford Fiesta R5) didn’t get quite lucky again during the day. After being the first team on the road on the first day of the event, today Luis Rego tried to get more acquainted with his new car in order to step up his driving ability. But a slow puncture in one of the Fiesta’s wheels, when the team was 10 km from completing the first run on Sete Cidades special stage, made the Azorean driver loose important time, denying any possibility for Rego to rise up at the overall classification.

But the real Azorean stars are Ruben and Estevão Rodrigues (Mitsubishi Lancer Evo IX). The brothers lead the ERC2 overall classification, besides they’re the third best Azorean formation at the event, being 18th overall. Wojciech Chuchala and Daniel Dymurski (Subaru Impreza STI) are second between ERC2 competitors with more 1:12,7. Pedro Vale and Rui Medeiros (Subaru Impreza STI) are third overall in ERC2, with 4,9 seconds than Chuchala.

Saturday leads Azores Airlines Rallye competitors’ to the east side of São Miguel Island for a double run on Graminhais and Tronqueira. Between those runs, competitors will pass again by Super Special stage Grupo Marques and by Vila Franca/São Brás.