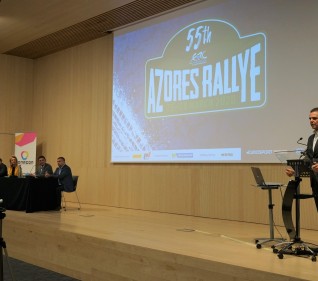 Counting with the presence of partners and sponsors, civilian, military and security authorities, competitors and team members as well as media, Grupo Desportivo Comercial presented this year’s edition of Azores Rallye, counting also with the presence of Jean-Baptiste Ley, FIA ERC general coordinator.

For Jean-Baptiste Ley, Azores Rallye has seen its notoriety increased year after year as shown by media coverage statistics and he strongly believe that the same might happen this year as RTP-Açores and Eurosport strengthened their partnership, with the local TV channel covering most of the event. The event’s public presentation was also the moment chosen for the symbolic Promoter Agreement signature.

António Medeiros, Clerk of the Course, presented the technical details for the 55th Azores Rallye, highlighting that the shakedown, free practice and qualifying stage will be realized during mid-Thursday. Later on, that same day, the all-asphalt 1,20 km PDL Stage will kick off this year’s Azores Rallye.

For Friday, a double round on Graminhais, Tronqueira and Vila Franca/São Brás will mark the day, that is going to end with the first run on Grupo Marques superspecial stage. On Saturday, competitors are invited to visit the east-side of São Miguel island with a two-time visit to Coroa da Mata, Feteiras and the iconic Sete Cidades, where the rally will end this year, and a last run on SSS Grupo Marques, by mid-day.

Azores Rallye is the first round of 2020 FIA European Rally Championship, counting also for the Portuguese and Azorean championship, as well as for the new Play/AutoAçoreana Trophy.

With the entry deadline approaching fast – entries are due to close by midnight today – several great drivers already confirmed their presence at the Azores Rallye 2020.

Tibor Érdi Jr and Dimitry Feofanov will battle for the best ERC2 place on podium, driving their Mitsubishi.

As for 2-wheel drive contend, Daniel Radstrom and Javier Pardo will defend Ford colors against the Peugeots of Pep Bassas, Ekaterina Stratieva and Azorean Ruben Rodrigues.

Azores Rallye will be held between 26-28 March. All information about the event may be found at www.azoresrallye.com and on social media profiles of the event.