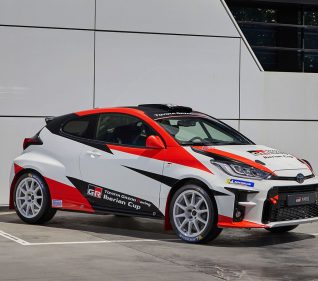 The 56th Azores Rallye was the chosen stage for the debut of the Toyota Gr Yaris, which is the base for the TGR Iberian Cup, a mono-brand competition in which several important names of the Iberian car sport will line up. The model, which will give its first competitive steps in São Miguel, is based on the model with the same name of the Japanese brand and was developed in partnership with MSi (Motor & Sport Institute) aiming the participation both in tarmac and gravel rallies.
The newcomer has a length of 3995 mm and width of 1805 mm for a weight that should be around 1280 kg. The engine is powered by a 3-cylinder in-line engine, with 1618 cc, which develops 261 horsepower and a torque of 360 Nm. The transmission is made to the four wheels through a GT-Four system and a 6-speed manual gearbox. In tarmac and gravel configurations, the vehicle mounts, respectively, 18 or 15 inches wheels and 356 or 297 mm front brakes. The rear brakes are 297 mm in both configurations. The competition kt also includes safety equipment, various carbon fibre parts and self-locking differentials.