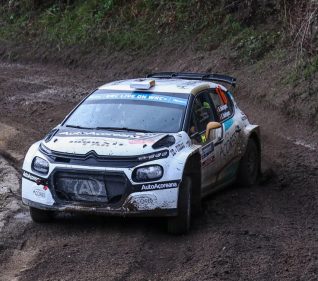 Rúben Rodrigues sets off for the 56th Azores Rallye “with the goal of finishing with the best result possible in our conditions. On the first day, we want to collect as many points as we can for CAR and, on the second day, if everything goes well and luck is on our side, we want to continue our work with the Citroën C3 Rally2. This is a difficult and very long rally in which the weather conditions, especially the rain, may condition the stages if the ground is not well compacted. We hope to repay the effort of the whole team and sponsors.
The Azorean Rúben Rodrigues, 36 years old, made his debut in rallying in 2009 with a Citroën Saxo. Until 2011 he was always at the wheel of front wheel drive cars like his debut car and the Citroën C2 R2 Max. From then until 2016 he drove a Mitsubishi Lancer Evo IX and in 2017 he moved to a Citroën DS3 R5. In the two following years he moved to a Peugeot 208 R2 and won in the Azores among users of two-wheel-drive cars. In 2021, he drove the current Citroën C3 Rally2 and won the Azorean absolute championship.