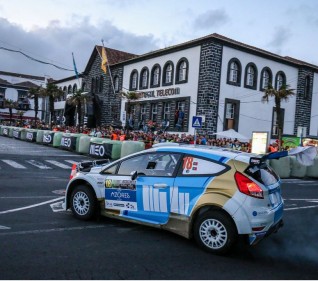 A record-breaking top-class field has assembled for this week’s Azores Airlines Rallye, which promises to kick-start the 2017 FIA European Rally Championship in spectacular style.

Based on São Miguel island, the largest in the mid-Atlantic archipelago, the event has moved forward from a June date to be held on 30 March-1 April this year, but its reputation remains as one of the most popular and challenging fixtures on the international rallying calendar.

After he became the first Azorean driver to win the rally for 45 years with his 2016 victory, Ricardo Moura will be out to defend his title, but the top European drivers he defeated in a thrilling rally-long fight last year return to seek revenge and are joined on the entry list by a number of exciting up-and-coming talents. In all, 28 top-of-the-range R5 cars feature on a 64-car entry.

This year’s rally includes 210.2 kilometres of competitive action, spread across 16 special stages. Taking in some breath-taking scenery, the stages are characterised by their sandy surface and narrow and undulating nature. In places, they are no wider than the width of a car, leaving no margin for error. This is demonstrated most dramatically on the famed Sete Cidades stage in the northwest of the island, which runs along the along the rim of a volcanic crater lake.

Changeable weather can also be a frequent factor on the island, with rapid switches between sunshine and rain and fog common, and notoriously hard to predict. With the earlier date, the climate could play a larger part than usual this year.

The beginning of the event is marked with a crowd-pleasing demonstration stage along the promenade in Ponta Delgada, capital of the Azores, on Wednesday evening. The competitive action begins on Thursday with the Qualifying Stage at 10h03 local time, from which the 15 fastest drivers will pick their starting positions for the opening leg as part of a ceremony prior to the first stage, a new test around the Lagoa science and technology park, at 15h01. That will be followed by three more stages on Thursday, the last of which will be the Grupo Marques superspecial.

This, the Lagoa stage, the Wednesday night City Show and other pre-rally activities will be broadcast live on the event’s YouTube channel (youtube.com/azoresrallyelive) in partnership with local broadcaster RTP Açores.

Friday’s schedule features six stages, including two runs of Sete Cidades, which is the longest test of the rally at 25.62 kilometres. The rally concludes with six further stages on Saturday, with the finish podium set for 18h56.

The entry list is headed by reigning double European champion Kajetan Kajetanowicz of Poland, who is set for another rivalry this season with fellow Ford Fiesta R5 driver Alexey Lukyanuk from Russia. Home hero Ricardo Moura is third seed in another Fiesta. Latvia’s Ralfs Sirmacis joined these three drivers in the fight for victory last year and returns in a Skoda Fabia R5 as one of a number of young drivers battling in the new FIA ERC Junior U28 category.

ERC Junior champion Marijan Griebel, fellow Skoda drivers Nikolay Gryazin and Jan Černý and the Peugeot Rally Academy’s Spanish duo of José Suarez and Pepe López will be others to watch in that contest.

Luís Manuel Rego will uphold home honour in ERC Junior U28 in a Fiesta, and he and Moura are joined in R5 machinery this year by another local Ruben Rodrigues, who drives a Citroen DS3. A number of other Portuguese drivers will be strong contenders, including Pedro Meireles, João Barros and two-time rally winner Bruno Magalhães. Multiple Azores champion Luís Pimentel will compete in ERC2 for production-specification cars.

The ERC Junior U27 class will be fought for in two-wheel drive machinery, with Opel starting as favourites with Briton Chris Ingram, Finland’s Jari Huttunen and Italian Tamara Molinaro.