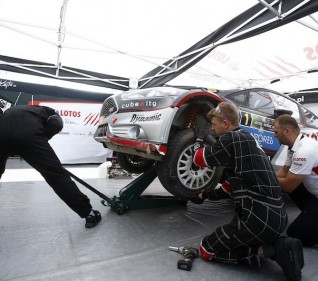 “It’s a broken front-left driveshaft so we have only two-wheel drive and it’s hard to drive like this,” said Kajetanowicz. “We have no idea how it happened. Now we have a service and I am sure the car will be okay after that.”

Kajetanowicz’s delay handed Lukyanuk a 43-second lead heading to SS12, Tronqueira, where the Russian spun his Ford Fiesta R5. Despite the scare, he still managed to keep his advantage over new second-placed driver, the local hero Ricardo Moura, who was fastest on SS12 in his similar Fiesta and is 25.3s behind in the overall standings.

“It was something wrong with the pacenotes,” said Lukyanuk. “Maybe I heard them wrong or they were called wrong, but I had a spin and I lost a lot of time. It’s really tricky and slippery in places so we had to be careful. It’s a big shame for Kajto because it was a great fight and I’m sorry for him. Normally I sleep like a baby on rallies but for the last three nights I’ve not been sleeping well. But now I need to get to the finish.”

With Kajetanowicz haemorrhaging more time through stages 12 and 13, the Grupo Marques superspecial, the Pole is currently 3m33.5s off the lead in third place following Ralfs Sirmacis’ exit. The young Latvian had taken advantage of Kajetanowicz’s woes to move into third only to break his Skoda Fabia’s steering on SS12 and retire. Jaroslav Orsak is currently fourth with Pedro Meireles fifth and David Botka sixth.

There was also drama in ERC Junior when overnight leader Marijan Griebel crashed out two kilometres from the finish of stage 12. It means Portuguese driver Diogo Gago, who had wrestled first place from Griebel on SS11, leads the category from Chris Ingram.

In the battle for honours in the ERC2 category, Wojciech Chuchala had slashed Ruben Rodrigues’ overnight advantage of 1m12.7s to 13.6s after SS13 thanks to a charging display in his Subaru. Chuchala had been pulling clear in the showroom division when a puncture dropped him back on Friday afternoon. Juan Carlos Alonso, who has travelled to the Azores from Argentina, completed SS12 third in class, albeit with damage to his Mitsubishi Lancer following contact with a bank, which he repaired at the stage finish.

Three stages remain on the 51st running of the Azores Airlines Rallye, a counting round of the European, Portuguese and Azorean championships. Following service in Ponta Delgada, where Kajetanowicz’s LOTOS Rally Team will be hard at work to restore its Fiesta to full working order, the competitive action resumes with the 13.37-kilometre Vila Franca Sao Bras stage from 15h17 local time. The finish is scheduled at 19h10.