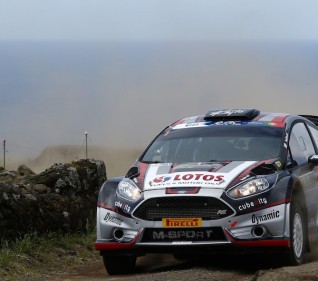 Lukyanuk, from Russia, was the first driver to make his move, winning Friday’s opening Pica da Pedra Golfe stage to climb from third to first in the overall standings. Poland’s Kajetanowicz, the overnight leader in his similar Ford Fiesta R5, hit back with the quickest time through Feteiras Meo to reclaim the lead. And it got better for the reigning European champion when he won the legendary Sete Cidades stage along the rim of a volcanic crater, to open up an advantage of 12.2s heading to midday service in Ponta Delgada.

“That was an incredible stage, it’s beautiful,” said Kajetanowicz following the fog-hit 25.62-kilometre test. “There was not much fog for me but the grip was changing all the time and you have to read road but it’s impossible because no part of the road looks the same. I am happy to be here because there are a lot of places where you can finish the rally.”

Ralfs Sirmacs was second overnight, 1.0s behind Kajetanowicz, but a cautious approach from the youngster in the difficult conditions, means the Latvian Skoda Fabia R5 driver is fourth overall, 17.1s behind new third-placed man Ricardo Moura, the leading driver of the Azores in a Fiesta R5.

Pedro Meireles and Jose Pedro Fontes are fifth and sixth after this morning’s opening three stages with David Botka, Jaroslav Orsak and Antonin Tlustak next up. Miguel Barbosa, who is running first on the road, is P10 with Luis Rego one place beind despite a front-left puncture in Sete Cidades. Joao Barros was sixth when he crashed on SS7.

Friday morning’s three stages will now be repeated in the afternoon with the second running of Pico da Pedra Golfe due to begin at 14h47 local time.