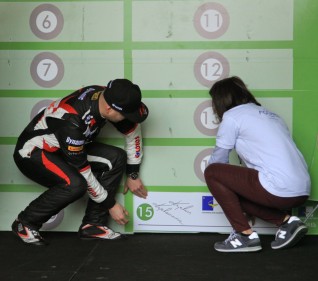 Kajetan Kajetanowicz has chosen to run 15th on the road on the opening stages of the Azores Airlines Rallye later today.

Reigning two-time FIA European Rally champion Kajetanowicz had the privilege of being the first driver to pick his starting position in a ceremony held in Ponta Delgada, having posted the fastest time in the earlier Qualifying Stage.

He chose the lowest possible starting position, where he will hope to enjoy the best of the road conditions as those ahead of him sweep away the loose gravel on the sandy São Miguel stages. “It’s not possible to know everything about this rally, even if you are here for the third or fourth time,” he said. “Everything can happen. So this is my choice. It wasn’t an easy choice. But first of all I’m really happy to be here, this is very important.”

Alexey Lukyanuk was only 0.107 seconds slower than his ERC rival Kajetanowicz in the Qualifying Stage, a reversal of their positions from the same contest on the 2016 event. The Russian selected 14th, one place in front of Kajetanowicz. “I’m really happy to be here. It’s going to be really interesting an exciting for everybody I hope,” Lukyanuk said.

Local hero Ricardo Moura was next up and picked 13th place. The full top 15 starting positions for leg 1, section 1 are as follows:

The first four stages of the Azores Airlines Rallye will take place later today, beginning at 15h21 with the new Lagoa stage. This will be broadcast live on the event website (azoresrallye.com/rally-17/live-rallye/) and YouTube channel (youtube.com/azoresrallyelive), as will the starting order selection and pre-rally press conference as well as the day-ending Grupo Marques superspecial, which is scheduled for 17h22.