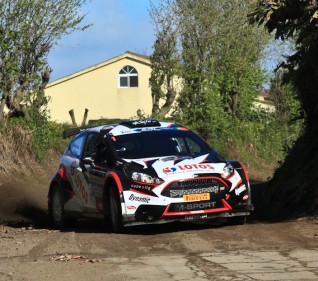 Kajetan Kajetanowicz resumed his rivalry with Alexey Lukyanuk with a narrow victory on the Qualifying Stage for the Azores Airlines Rallye, the opening round of this year’s FIA European Rally Championship.

Kajetanowicz will now get first choice of starting position for leg one of the rally when the 15 fastest drivers take part in the start selection ceremony at Portas do Mar at 12h30.

Local hero and last year’s winner Ricardo Moura was third quickest in another Fiesta, 1.461s slower than Kajetanowicz and just ahead of 19-year-old Nikolay Gryazin, who was the leading driver from the ERC Junior U28 category and also the fastest in a Skoda Fabia R5. José Suarez took fifth in his Peugeot Rally Academy 208 T16, in front of Marijan Griebel and Ralfs Sirmacis.

Pepe López, Jan Černý, Murat Bostanci, Łukasz Habaj and Joaquim Alves were the other drivers making up the 15 fastest who will get to choose their starting positions.

Chris Ingram was quickest of the ERC Junior U27 contenders in his Opel Adam R2.

The first four stages of the Azores Airlines Rallye will take place later today, beginning at 15h21 with the new Lagoa stage. This will be broadcast live on the event website (azoresrallye.com/rally-17/live-rallye/) and YouTube channel (youtube.com/azoresrallyelive), as will the starting order selection and pre-rally press conference as well as the day-ending Grupo Marques superspecial, which is scheduled for 17h22.