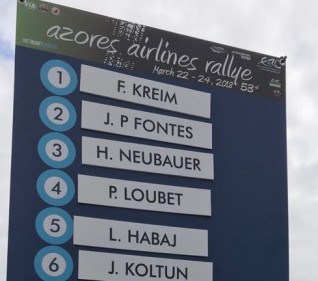 ŠKODA AUTO Deutschland driver Fabian Kreim will lead the field away for the first day of the FIA European Rally Championship’s opening round, the Azores Airlines Rallye, after picking first position on the road.

Local hero Ricardo Moura earned the right of first selection thanks to winning the earlier Qualifying Stage, and unsurprisingly chose to start in P15, aiming to take advantage of those ahead sweeping the gravel roads clean for him.

From there, the next 14 fastest drivers opted to start in reverse order, with second quickest Alexey Lukyanuk opting to start P14 aboard his Russian Performance Motorsport Ford Fiesta R5, behind third quickest Fredrik Åhlin P13 on the road.

Azores Airlines Rallye’s mascot Percy got in on the action, attempting to steal the glory of first driver running on the road for himself. Noticing the full reverse order pattern, he broke onto the stage ahead of Łukasz Habaj, though unsurprisingly wasn’t allowed to keep the place Kreim would eventually take.