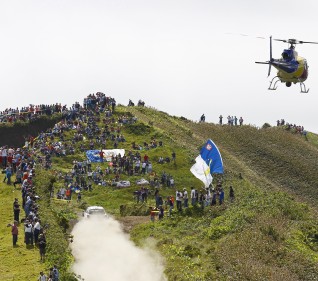 The battle for victory on the opening round of the 2018 FIA European Rally Championship won’t just be fought out on São Miguel’s spectacular gravel stages but on live television as well.

Under an exciting agreement between the Azores Airlines Rallye organiser, Rádio e Televisão de Portugal (RTP) and ERC promoter Eurosport Events, seven stages will be broadcast live including both runs of the iconic Sete Cidades volcano stage, the fan-friendly Grupo Marques superspecial stage and the event-closing blast through the Tronqueira forest.

The action will be broadcast on RTP Açores, RTP 2 in Portugal, RTP Madeira and RTP Internacional and will feature footage captured by the Eurosport helicopter. Coverage will also be available on the Azores Airlines Rallye official YouTube channel and website.

Jean-Baptiste Ley, the ERC Co-ordinator, said: “With a record-breaking entry including 35 R5 cars, the Azores Airlines Rallye was already a big success. But with confirmation of live television coverage, one of the best events of the season has just got better.”