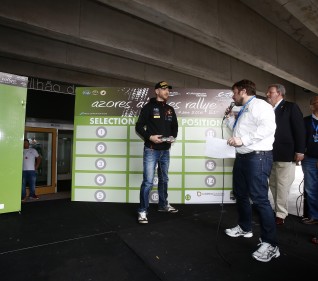 The Russian was the first driver to choose his starting position after setting the pace on this morning’s Qualifying Stage. At a ceremony in Ponta Delgada earlier, he was presented with Azorean biscuits as part of an initiative by the event organisers to promote local produce.

“I hope it’s a good decision but we will see later,” said the Ford Fiesta R5 driver. “If we made something wrong it’s not that dramatic because we have only 30 kilometres [of stages] today and it won’t have a big impact on the result.”

Reigning ERC champion Kajetan Kajetanowicz, who was second quickest in qualifying, selected position 12 on the road. Asked why he didn’t choose to run immediately ahead of Lukyanuk, Kajetanowicz said: “Twelve is not so far and we don’t know what it will be like with the weather. We’ve had some wet, dry and damp and we don’t know what position is the best. Alexey is 15 and I want to be before him after the rally also!”.

Part one of the opening leg of the Azores Airlines Rallye, which is based on the island of Sao Miguel, begins at 15h00 today and includes four stages. The first of which, Batalha, measures 7.27 kilometres in length and begins at 15h57. While it uses gravel roads in the main, 26 per cent of the Batalha route is on asphalt, which will add to the challenge facing the drivers. The fan-favourite Grupo Marques superspecial rounds out the day’s action from 18h02.