Magalhães and Sousa are aiming to run at SATA Rallye Açores 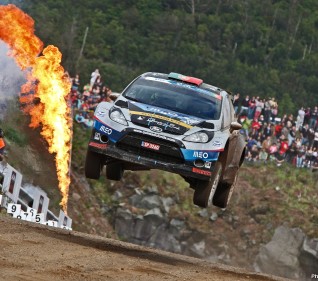 According to the Portuguese motorsport magazine website, Autosport.pt, two of the best and most actual rally drivers of Portugal are aiming to participate over the 49th edition of SATA Rallye Açores that goes underway between 15 and 17 May, 2014.

Driving two of the most recent specification rally cars, a Peugeot 208 T16 for Bruno Magalhães and a Ford Fiesta RRC for Bernardo Sousa, both Portuguese star drivers are now facing new challenges and confirming their presence at the Azores round of the FIA European Rally Championship, when we’re only a few days start from the first event of the Portuguese Rally Championship.

Magalhães has already won SATA for two times, one of them on a close and hard battle between him, Hanninen (that now runs for Hyundai WRC Team) and Kopecky that still runs for Skoda, this time at the Asia Pacific Rally Championship, which was only decided on the last meters of the last stage. The Peugeot driver considers this year “as a zero year, in order to gather the needed sponsoring for a full 2015 season bid”.

Sousa is the “rebel guy”! Victorious in 2011 at Jordan Rally counting for that year’s WRC2 season, the Madeira island driver had never been to successful at the Azores but his presence usually is synonymous of great rally moments where the 2010 Portuguese rally champion drives like no other.

Along with Sousa and since the Portuguese driver runs this year an AT Rally Team car owned by Oleksii Tamrazov, the Ukrainian is also a possibility driving once again at the Azores a Ford Fiesta S2000.