Moura, Rego and Rodrigues at the Azorean podium of Azores Airlines Rallye 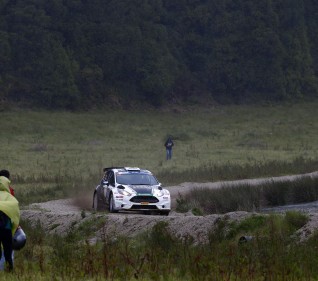 Azores Airlines Rallye was round 3 of the Azorean Rallye Championship and besides the favouritism and an almost sure victory for Ricardo Moura, all Azorean eyes and attention were focused on the Ford Fiesta R5 debut by Luís Miguel Rego and on a possible good result of Ruben Rodrigues on the ERC2 competition. Another point of interest would be on another debut, this time for Rafael Botelho on his Citroen DS3 R3T (former Henrique Moniz, Azorean 2WD champion).

Ricardo Moura and António Costa (Ford Fiesta R5) won the rally between the Azorean competitors and became the first local crew to achieve past 45 years of another local win, by Raul Mendonça.
On the first rally with his new Ford Fiesta R5, Luís Miguel Rego and Carlos Magalhães (Ford Fiesta R5) finished second amongst Azorean crews and seventh overall. After keeping away the bad luck moments of Friday, “Luisinho” Rego as friends use to call him just step up the momentum and achieved the best possible result.

Ruben and Estevão Rodrigues (Mitsubishi Lancer Evo IX) were battling all the time, not for the best result for the Azorean championship, but for the ERC2 overall victory. Having on the Polish Wojciech Chuchala their main opposition, the Rodrigues brothers ended day 2 leading the ERC2 scoreboard. But Chuchala’s driving became more efficient and fast on event’s day 3 and for Rodrigues’ consolation the second place overall on ERC2 as well being the 3rd best Azorean crew was the result possible.