PRC: Ricardo Moura leads with Magalhães on the lookout 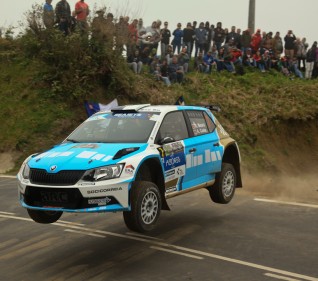 Ricardo Moura and António Costa (Skoda Fabia 5) have finished the second day of the Azores Airlines Rallye as leaders of the Portuguese Rally Championship (PRC), as they were the fastest in the six special stages overall. But the life of the three-times Portuguese champion was not easy, because in the first run of the Feteiras Meo, Moura had a puncture and lost time to his most direct opponents, as he finished the stage in fourth. After, came the first loop-run of Sete Cidades and Moura lost time again due to a slow puncture.

On the other hand, Bruno Magalhães and Hugo Magalhães (Skoda Fabia 5) made a competition in reverse. The 2017 winner of the Azorean rally slowly climbed positions throughout the day, just as he did last year. As he arrived in Ponta Delgada, at the end of the day, he had a slim gap of a little more than 10s to the leader.

Bernardo Sousa and Valter Cardoso (Citroen DS3 R5) are now in the third position, with the native from Madeira Island more worried about the math of the Azorean championship than with the national championship, as the gap for the leader reaches more than 1m20s.

Carlos Vieira and Jorge Carvalho (Hyundai i20 R5) ended the day in the fourth position for the nationals and had the best third time for the first three stages, but they didn’t manage to improve during the second runs.

Ricardo Teodósio and José Teixeira (Skoda Fabia R5) are next in the national championship. The pilot from the Algarve won the first pass through Feteiras Meo, thus completing the top 5.

Pedro Sá and Leandro Parreira (Mitsubishi Lancer Evo IX) are the best pilots in RC2, at the end of the second day of the Azores Airlines Rallye. The pair ended the day climbing one position in the overall national classification.

Despite having ditched the Citroen DS3 R5, which is now in the hands of Bernardo Sousa, Ruben and Estevão Rodrigues (Peugeot 208 R2) did not want to miss the chance of participating in the Azores Airlines Rallye. After having become known, since last year, as one of the fastest teams in Azorean 2-wheel drive, the Rodrigues’ brothers have returned to smaller cars and, in this year’s rally, they have been proving that once you learn, you never forget. As a result, they are leading the event at the end of this second day.