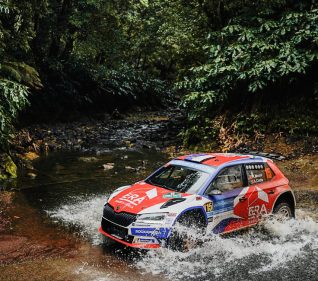 Ricardo Moura entered the 56th Azores Rallye very well and placed himself at the front of the organization of Grupo Desportivo e Comercial, which is on the road today and tomorrow. The Skoda Fabia Rally2 Evo driver was the best in the first passage through Graminhais, the first stage disputed due to the cancellation of Coroa da Mata 1, and gained advantage over the competition. Also very strong is Ken Torn, at the wheel of a Ford Fiesta R5 Mk II, which follows in the second position, only 1,5 away from the leader.
In the lowest place of the provisional podium is the Spaniard Efren Llarena, 4.3 s behind the leader. In the next positions are Simon Wagner and Simone Campedelli, both in Skoda Fabia Rally2 Evo. Sixth placed, Rúben Rodrigues was the fastest in PE 3 and recovered many places. Right behind, Bruno Magalhães is seventh with the Hyundai i20N Rally2 and precedes a batch of three drivers with Skoda Fabia Rally2 Evo, Simone Tempestini, Javier Pardo and Alberto Battistoli.