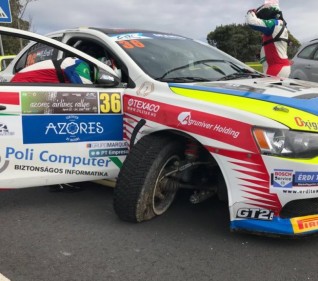 A trio of drivers have retired from Azores Airlines Rallye after less than 20 kilometres of the FIA European Rally Championship’s opening round.

Tibor Érdi Jr. made it no further than Lagoa Stage’s opening 2.14 kilometres, shearing the front right wheel from his Mitsubishi Lancer Evo X. A bemused Érdi could not explain what had happened, commenting that he “hadn’t touched anything” during the short superspecial.

Most of Thursday’s mileage comes from the first pass of Vila Franca / São Brás, its 17.08 kilometres proving treacherous for many competitors.

Herman Neubauer was first to be caught out by tricky conditions, as light rain began to fall. Running third on the road, he crashed late in the stage, but thankfully he and co-driver Bernhard Ettel were reported as OK following the incident.

Pierre-Louis Loubet was scheduled to be next car through after Neubauer, but he too failed to reach the finish line, his OSCARO-backed BRC Racing Team Hyundai i20 R5 suffering a technical issue midway through the test.

Other big names came close to being caught out by the challenging second stage. Reigning ERC Junior U27 champion Chris Ingram nearly sent his Toksport WRT ŠKODA Fabia R5 into a tree, while Alexey Lukyanuk lost time from going off into a field.