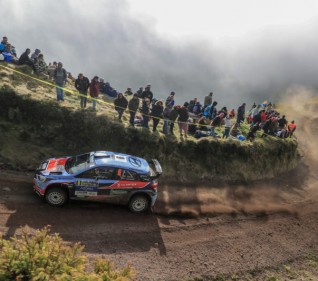 As first into a pair of stages yet to feature in this year’s rally itinerary, reigning Portuguese rally champion Vieira faces a day of road sweeping, while rally leader Alexey Lukyanuk benefits from a cleaner path swept by those ahead restarting P10.

Frank Tore Larsen finished where he started on Friday in ninth place, so once again contributes to sweeping the dusty gravel stages as second car on the road, with Rhys Yates and Bernardo Sousa following soon thereafter.

Gravel sweeping won’t be a big concern for ERC2 and ERC3 drivers, the latter headed by Mārtiņš Sesks setting off P23 and the former lead away eight minutes later by Sergei Remennik.

There are 11 crews which retired from the first leg looking to restart today, though all are still subject to checks before being allowed to resume. 10 must pass re-scrutineering, while Emma Falcón will undergo a medical evaluation after hurting her back on Friday.

Hermann Neubauer and Albert von Thurn und Taxis will not attempt to restart leg two, as both their cars suffered terminal damage to their body shell and rollcage respectively.